The Legend of John Henry [HQ]

John Henry was a mighty man. He was inspired, he worked so hard, and it killed him.

Where is the modern John Henry? Where is the song about the guy who did most things right, attended 2 years college on debt, but finds himself a diabetic Walmart Associate? Does it ends on his suicide, the second leading cause of death for Americans 25-34[1]?

Why is a Disney re-creation of a 19th century folktale more true than so much of what we call non-fiction?
END_OF_DOCUMENT_TOKEN_TO_BE_REPLACED

ON AN AMERICAN FLAG

So close it’s but a few stripes rippling, thrashing against the encroaching night.

Fellow patriots. I am afraid.

We’ve gone and sold ourselves out. Like cheap whores, to the Chinese, to Wall Street, to the thugs in Washington.

Are we not the free? The brave?! Yet we let them steal our money.

We let them tell us what to eat, how to raise our children.

You know, Martin Luther King, he was just an ordinary preacher. Abraham Lincoln born into a log cabin. Many doubted.

But they knew the simple truth that right makes might.

Remember that salient truth. You choose. You can choose! For the sake of your children I beg choose virtue. Choose goodness. Choose to be today’s hero.

CAPTAIN JOHN HU, 32, looks out onto across the flight deck onto the dark night.

His plane is aligned to the runway, wings folding down. The jet blast deflector raises. He is armed and readied.

Remember the creed of the Founders. Liberty. Liberty at any cost, liberty however turbulent however ferocious the waters – liberty! – that is our God given path.

The flight crew clears. The Pratt & Whitney F135 engine roars to 50,000 pounds force as steam escapes from the catapult below.

The holdbacks release and the fighter shoots forward. In but two seconds, we’re airborne, catapulted to the heavens.

That is what we choose, it is our ultimate only end. Liberty! Liberty or death!

The plane banks left. Down below, the USS George Washington steams forward, cutting through the turbulent waters.

And IMPACT. Massive explosions along her hull; man and metal turn to dust.

A man in a conservative suit, early-sixties, washes his hands under bright white florescent light. He is VIGGO GOMEZ, White House Chief of Staff.

END_OF_DOCUMENT_TOKEN_TO_BE_REPLACED 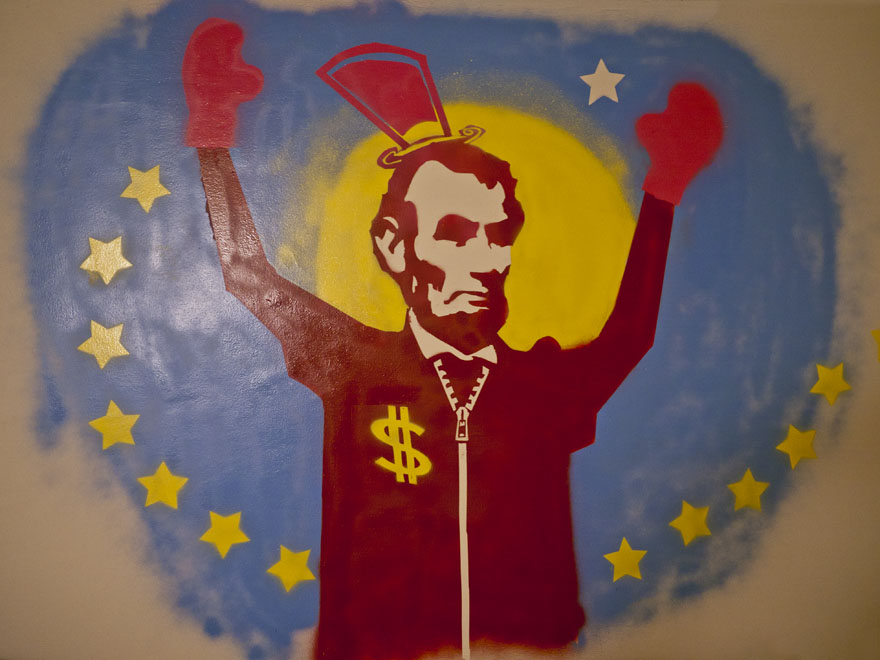 This work mediates Abraham Lincoln’s honest humility with the triumphant destruction of the racist, slaving Confederacy.

August 2012, it was destroyed per the policies of Roosevelt Landings.